In other words, attempting to put learners into boxes and trying to only give them material that matches their “style” isn’t going to make them retain information any better. Most people benefit from a range of teaching techniques, and utilising different learning methods can actually improve learners’ adaptability.

Visual or spatial learners supposedly retain information best by viewing pictures or images and respond well to colours and mind maps. These logos represent the main aspect of each learning style. Do you like to learn by remembering symbols and images? 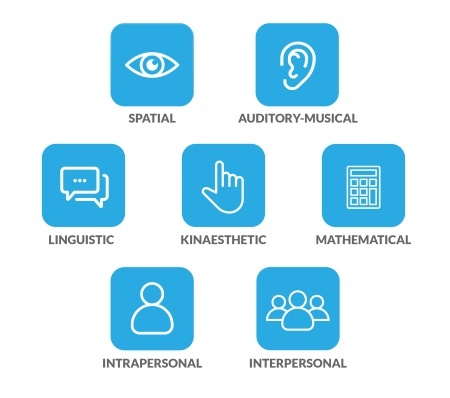 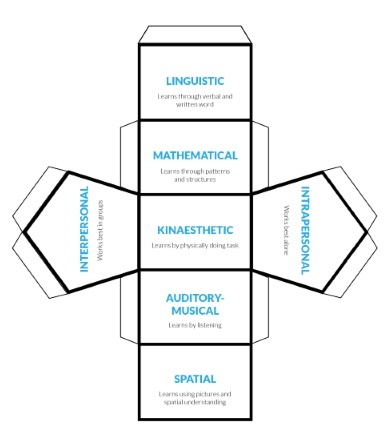 Aural or auditory-musical learners should retain the most information after hearing it. Click below to listen to this recital of the different learning styles: do you tune out or find yourself remembering more than if you read th transcript?

Social, or interpersonal learners are meant to work best when they participate in study activites with other people such as quizzing each other or having a study group. Print and use these Top Trumps style cards with a group of friends.

Solitary, or intrapersonal learners supposedly work best alone. Making notes and reciting them back are useful activities when studying by yourself. Most of us will have to do some solitary revision at some point in our lives, so download and complete this worksheet to see if it works for you.

Learning styles is the theory that learners can be categorised depending on how they take in information. Therefore, teaching students according to their specific learning styles will result in improved learning. While there is no concrete evidence to support the success of these learning styles, a 2012 study revealed that 93% of teachers in the UK agree that students learn better when they receive information in their preferred learning style (Dekker et al, 2012).

These learning styles derived from Howard Gardner’s 1960s theory of Multiple Intelligences. This theory states that: “we are all able to know the world through language, logical-mathematical analysis, spatial representation, musical thinking, the use of the body to solve problems or to make things, an understanding of other individuals, and an understanding of ourselves” (Lane 2008). This essay plans to outline the seven different learning styles while categorising them into 3 main categories, personal, sensory and informational. It will then recommend study methods for each type of learner.

The personal category links learning styles which depend on other persons to be present or absent. These are different from other learning styles which focus on how the learner takes in information, instead they depend greatly on the learners’ surroundings and whether they are studying with or without people. These types of styles split into Interpersonal learners or Intrapersonal learners.

Intrapersonal learners are also known as solitary learners. Unlike interpersonal learners they work best when studying alone. They are known to be interested in philosophy, psychology and theology because of their proficiency in self-reflection.

“They’re in tune with their inner feelings; they have wisdom, intuition and motivation, as well as a strong will, confidence and opinions (Lane, 2008).” Unsurprisingly, these are the most independent learners from all the seven styles. Recommended study methods for intrapersonal learners include keeping a journal and finding a personal interest in the topics being studied.

Spatial learners are visualizers, which is why they’re also known as ‘visual learners’. As educational writer Stacy Mantle describes, these types of learners are good at working with colours and pictures and using the “mind’s eye” (2001). Visual learners use spatial understanding; thus Gardner discusses that their problem solving is useful for navigation and map reading. This type of learning is also helpful for visualising an object from different angles and in playing chess (Gardner, 1993).

Linguistic learners, which are also known as verbal learners, work best with words. Whether information is spoken or written, these learners memorise information through language use. Gardner states “the linguistic intelligence is activated when individuals encounter the sounds of a language or when they wish to communicate something verbally to another person” (1993). However, this learning style doesn’t correlate exclusively with the spoken word. For example, deaf people could demonstrate linguistic intelligence through the use of signs (Gardner, 1993).

As the name implies, mathematical learners work best using numbers, structures and reasoning, this is why they are also referred to as logical learners. According to Mantle, these learners make the best engineers and work by categorising and classifying abstract patterns or relationships (2001). Gardner notes a similarity between mathematical and musical learners, because both are drawn to structural patterns, which can often exist in music (1993).

To summarise, despite the lack of substantial evidence supporting the success of these learning styles, they remain widely popular and are still used in schools throughout the country. Christian Jarrett discusses this popularity, stating “Parents, understandably, like to think that their children are receiving a tailored education. Teachers, also understandably, like to think that they are sensitive to each child’s needs and many are clearly motivated to find out more about how to fulfil this ideal” (2015). However, while there is still value in tailoring teaching methods based on the content and intended audience, attempting to strictly organise individuals into specific styles is not likely to be helpful, and could even prevent them from developing more rounded learning skills.

Jarrett goes on to describe how “learning is improved (for most everyone) by combining different activities – such as drawing alongside more passive study.” While it is not as useful as once thought for categorising learners, the 7 learning styles theory may still be of some use in making both teachers and learners alike aware of a greater variety of learning techniques and methods.